Located in midtown NYC on Fifth Avenue at 34th Street, The Graduate Center offers multiple event and meeting spaces that can accommodate 10 to 400 guests for your next conference, reception, performance, film shoot, screening, or private event.

Let our event specialists help you create an affordable event in our landmark building that your guests will remember. Key Features of Our Event Venues

Our Event Spaces in Midtown NYC Where can I host my events in NYC?

Our event spaces are located at The Graduate Center, CUNY at 365 Fifth Avenue, New York, NY 10016. Our building is a landmark building, once home of the B. Altman Department Store, on 34th Street, within a few steps of the Empire State Building.

Located on Fifth Avenue between 34th and 35th Streets, the building is two blocks east of Penn Station, one block east of Herald Square, and two blocks west of the 33rd Street and Park Avenue station. The closest subway station, located at 34th Street and Avenue of the Americas, is served by the B, D, F, N, R, and Q trains. View the map.

We also have event spaces at the Advanced Science Research Center at The Graduate Center, CUNY, located in Harlem at 85 St. Nicholas Terrace, New York, NY 10031.

What kind of events can be used for the event spaces?

Event spaces can be used for conferences, receptions, performances, film shoots, screenings, and private events. In the past, our spaces have been rented for the filming of an Amazon original series, important political announcements, as well as company annual meetings, cocktail receptions, business exam prep classes, and a wide array of other events.

How many people can your event space hold?

Depending on the space you book, we can handle from as little as 10 to as large as 400 attendees. Please check the room page for details on capacity.

How much does it cost to rent the event space?

Pricing depends on the space you book, time of year, and services needed. Please fill out our contact form so an event planner can speak with you and provide an estimate. 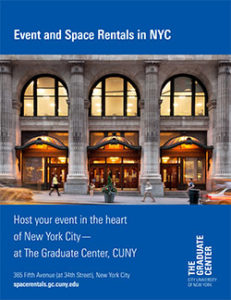